METTAWA, Ill., April 21, 2021 (GLOBE NEWSWIRE) -- ﻿For the second consecutive year, Brunswick Corporation (NYSE:BC) has been recognized by Forbes and Statista as one of the Best Employers for Diversity. Brunswick ranked among the top 20 percent of the 500 companies on the list, ranking 80th overall and sixth in the state of Illinois.

“We are honored to again be recognized by Forbes as one of the Best Employers for Diversity, especially as this award reflects the input of our colleagues throughout the enterprise,” said Brenna Preisser, Brunswick Corporation President of Business Acceleration and Chief People and Strategy Officer. “We believe the diversity of our team, and the different experiences and perspectives they bring, inspire the greatest innovation and are necessary to shape the future of our company and of recreational boating.

Over the past year, Brunswick took significant steps in promoting a diverse workforce including the establishment of a Diversity, Equity, and Inclusion (DEI) team to guide our initiatives and generate engagement across the enterprise.

In addition, the Company has supported and engaged in initiatives designed to support diversity, including:

“This award reflects our employee’s positive response to these efforts, and we look forward to building on this momentum in the future,” said Preisser.

Underscoring this long-standing company commitment, Brunswick has been honored with numerous awards for its dedication to Diversity, Equity and Inclusion over the past 12 months, including:

Forbes identified The Best Employers for Diversity through an independent survey of 60,000 U.S. employees working for companies employing more than 1,000 people in the United States. Employees who took the survey shared their perspectives on a series of statements surrounding topics of age, gender equality, ethnicity, disability, LGBTQ+ and general diversity concerning their employer. Diversity among top executives, evaluations from employees at other companies, positions responsible for diversity and communication of diverse company culture were also taken into consideration.

View the full 2021 list of America’s Best Employers for Diversity and learn how Brunswick supports diversity and inclusion. 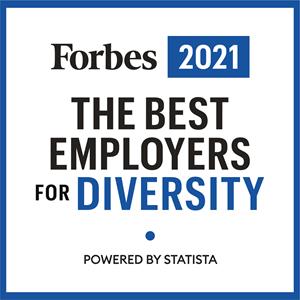