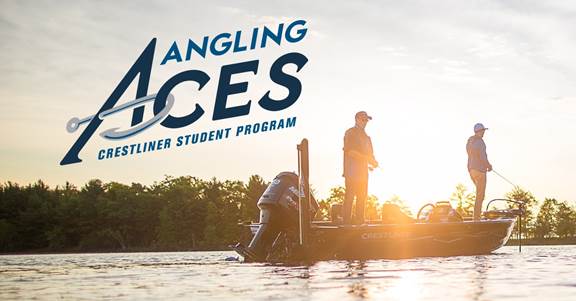 "One of the main components of the Angling Aces program is to support young anglers who would like to pursue professional fishing, as well as young angling student teams," said Lori Kneeland, director of marketing. "It's our honor to be able to give to the future leaders of this sport."

"This program is a true joy for us as a company," Kneeland said. "We're happy to not only support these promising young anglers, but also to bolster the sport of fishing. We look forward to many more opportunities to award scholarships and offer support through Angling Aces."

About CrestlinerLocated in Otsego, Minn., Crestliner boats and pontoons are crafted with an uncompromising mix of functional design, all-welded aluminum construction and a relentless commitment to excellence. Since 1946 Crestliner has been making boats forged with strength and defined by durability. As a world-wide leader, Crestliner continues to redefine the industry with boats built to last. A testament to our quality and craftsmanship, Crestliner has received the CSI Award of Excellence in Customer Satisfaction for Aluminum Outboard Boats for 10 consecutive years. Learn more about Crestliner and its line of boats by visiting crestliner.com.

Crestliner is a division of Brunswick Corporation, a leader in the recreational marine industry, brunswick.com